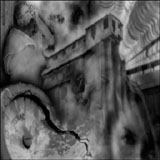 Between Rock & An Unobserved Place
"In the early summer of 1999 David, Jonas, Mats and Simon got a key to a room in an old candy factory in NynÃ¤shamn. In this factory there were some instruments. They took some deep breaths of dust (asbestos, concrete & other stuff) and started to play..."

A few name & lineup changes later, Sickoakes in 2003 is making some of the finest, seriously-amped-up rock minimalism around. In this three part epic, Wedding Rings & Bullets In The Same Golden Shrine, the ensemble scours a landscape of lonely radio tunings, glacial woodwind & brass harmonies, all resolved in stunning fashion by overdriven delayed guitars pegged to a frenetic drumming. Whatever was vague and unknowable in the first two movements gives way to an unmistakable fury and clarity in this powerful 15 minute piece.

Please Do Something
Netlabels